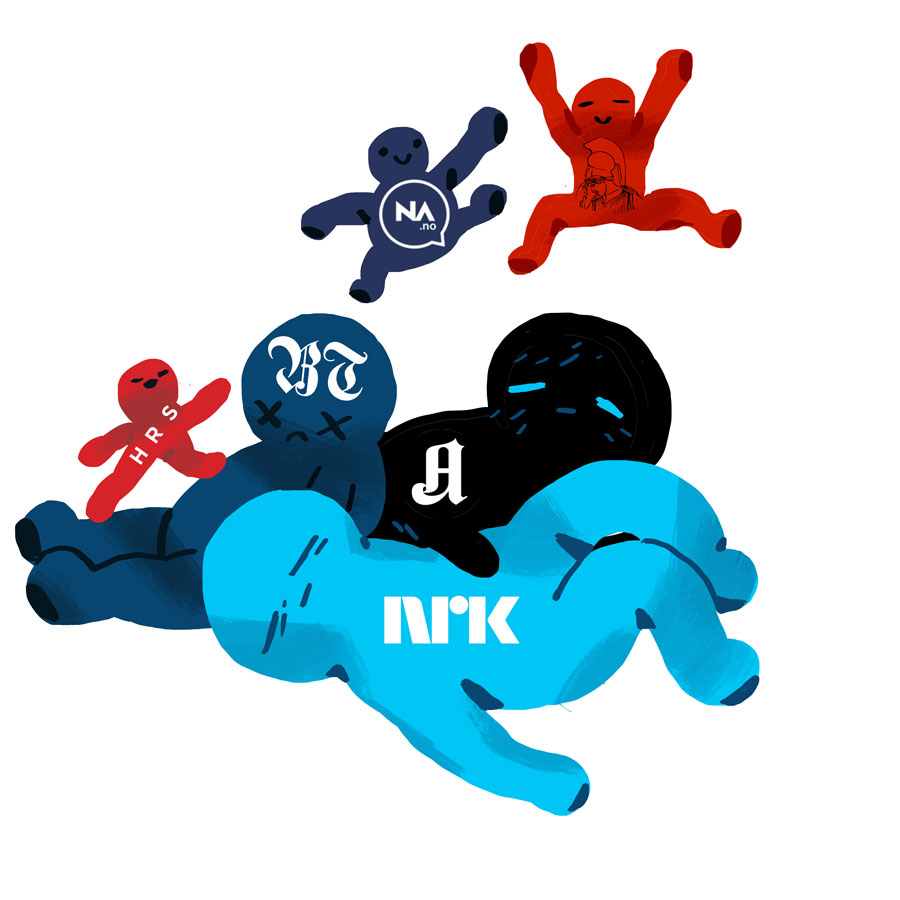 Samfunn
The [failing] news
According to the recent Reuters Institute Digital News Report, only 49% of the Norwegian population trust the media.
17. november 2017
 

Do you trust the media? Most Norwegians don’t.

The term «fake news» emerged around 2015, but is already useless. Whereas the phrase used to describe false information, it now simply means unfavourable articles. Donald Trump has used it more than fifty times on Twitter alone in the last year. His relentless attacks on mainstream media organisations, which he refers to as «the failing news», have an effect. A recent poll from Politico state that nearly half of US voters believe the media fabricates stories about Trump. Only 11% of Republican voters believe that mainstream news organisations do not fabricate news. The same pattern of media disillusionment is emerging with increasing strength in Norway.

The liberal bias
According to the recent Reuters Institute Digital News Report, only 49% of the Norwegian population trust the media. Trust might be higher than in the US (38%), but is still considerably lower than in countries such as Finland (62%), Brazil (60%) and Portugal (58%). The researchers behind this extensive international study argue that the underlying drivers of media mistrust is based in deep-rooted political polarisation. It seems only logical that a large country with a two-party system, such as the US, will have polarised distrust. Democrats don’t trust sources such as Fox News while Republicans don’t trust The New York Times. However, the media landscape is very different in an egalitarian and homogeneous country such as Norway.

Reuters observe that most Norwegian mainstream media outlets are considered politically centre-oriented, with exceptions such as Klassekampen and Dagsavisen to the left and Nettavisen and Dagens Næringsliv to the right. Nevertheless, there is a perceived «liberal bias» surrounding centre-oriented organisations such as the broadsheet Aftenposten. This implies that the distrust in the «liberal media», to borrow from American terminology, is more or less synonymous with a distrust in most media organisations. Aftenposten, known as a liberal conservative paper, decreased their brand value by four percentage points in the third quarter of 2017 according to YouGov’s brand index. According to the same poll, Nettavisen is now perceived as more popular than both VG and Dagbladet.

Sharing is caring
Nettavisen might be considered part of the mainstream media landscape, but nevertheless represents the trend of populist Islam-critical content. Statistics from the social media tracker Storyboard shows that five in ten of the most popular articles from Nettavisen in 2017 are framed as critical towards immigration, or in favour of the neoliberal populist Progress Party. It is likely that the rising popularity and trust in Nettavisen relates to the public discourse on immigration. Reuters observes that those with a critical view towards immigration and a political affiliation to the right are far less likely to trust the so-called liberal media, that is, most media. Nettavisen’s rising popularity and perceived trustworthiness is one factor, but it’s the accelerating growth of online alt-right news sources that really intensifies polarisation in Norway.

Data from Storyboard shows that content from the outlets document.no and rights.no (Human Rights Service), strongly associated with criticism of Islam, is increasingly prevailing across social media. The latter online paper has a very limited number of editorial staff members, and hence produce much fewer articles than a large organisation such as the public broadcaster NRK. However, their engagement rate – the average sum of likes, shares and comments on each article – is tremendous. In November, an average article from rights.no received 1 601.3 engagements. For NRK, the average was 84.7. Within the last month, the two alt-right news outlets created more engagement, and presumably visibility, than Dagens Næringsliv, Adresseavisen and Dagsavisen combined.

Who cares?
With the Internet came overwhelming opportunities related to distribution and discussion of news. It is easy to argue that an increasing number of media outlets is good for both democracy and freedom of speech. However, the initial enthusiasm and optimism surrounding the Internet has within the last years been replaced by profound pessimism. Following the thoughts of the political scientist Benedict Anderson, shared media experiences is a crucial aspect of any nation state. The diminishing print circulation and decreasing TV and radio consumption is part of individuating our news consumption habits. Recent research even indicate that news sharing in social media is decreasing, while the practice of sharing news via private messenger apps is rising.

The overall individualisation of news as well as the devaluation of mainstream news outlets leads to entrenchment of the already-existing echo chambers. The Norwegian government’s proposal of removing 25.7 million kroners in press support is not precisely combatting this development either. The broad public access to high-quality journalism from centre-oriented mainstream news outlets is a crucial aspect of an informed public sphere. The declining trust in the Norwegian mainstream media is therefore a threat to democracy itself.

Tellef Solbakk Raabe is a graduate student at The University of Cambridge, where he is researching the power and influence of Norwegian political commentators.